The main consonant chart of the IPA was covered in two earlier parts (you can see the whole series up here). In this post, I’ll cover the smaller box below the main one. This is the one labelled “non-pulmonic consonants”.

One thing you’ll notice right away is that this little chart actually has the same places of articulation as the large consonant chart. You can see there are terms like “bilabial”, “dental”, “palatal”, etc. There are even two manners of articulation mentioned: lateral and fricative. So why aren’t these symbols grouped up with the main chart?

In addition to place/manner/voicing, consonants can also differ in terms of something called “airstream mechanism”. This has to do with the way that airflow is created in the vocal tract. There are four known airstream mechanisms used in human languages. All of the consonants in the main chart have a “pulmonic egressive” airstream mechanism. Pulmonic means “having to do with the lungs”, and “egressive” means “outward”. A pulmonic egressive sound is made by pushing air up out of the lungs. This is the most basic kind of airstream, found in all languages around the world.

There are three other possible airstream mechanisms. Each of the columns in the small consonant chart represent one of them. The terminology here is somewhat confusing, unfortunately. The IPA chart has three terms: “clicks”, “implosives”, and “ejectives”. These terms are extremely commonly used, but they refer to classes of sounds, and they are strictly speaking not airstream mechanisms. The mechanism associated with each of these types of sounds will be described below. 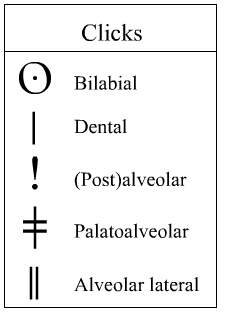 The first category is called “clicks” on the IPA chart, but the technical term for the airstream is “lingual ingressive”, or sometimes “velaric ingressive”. Clicks are completely non-pulmonic. Producing a click does not require you to breathe out from your lungs. You can in fact make clicks while holding your breath, or even breathing inwards (not that this happens in any language). For a click, you put two articulators together, trapping a pocket of air. When you release the closure, the you get a popping, or clicking, sound.

Five kinds of clicks are listed: bilabial, dental, alveolar, palatal, and lateral. Many of these clicks are found in English speech, but as sound effects or signals, not as linguistic units. A bilabial click is similar to a “fake-kiss” you might make by pressing your lips together. Alveolar clicks are sometimes used to imitate the sound of a horse walking.  Here are some native speakers of a click language demonstrating four of them.

The articulation of a click is actually very complicated. Clicks don’t really have just one place of articulation, but two. In addition to the anterior closure listed on the IPA chart, all clicks have another constriction further back as well. Research by Amanda Miller, using specialized ultrasound technology, has found that the posterior constrictions differ as well, and this can even explain certain phonological patterns.

Clicks are extremely rare around the world. They are only known to occur in a small number of languages in Africa. The Khoi-San languages, spoken in various places around southern Africa, are famous for the extremely large number of clicks they contain. Some Bantu languages in the same region, such as Zulu, have clicks as well, but they were in all likelihood borrowed from Khoisan. The Hadza and Sandawe languages of Tanzania also have clicks, although they are not known to be related to the Khoi-San languages.

There is only one other place in the world where clicks have been reported. In Australia, the Lardil people once used a ceremonial language called “Damin” which apparently contained clicks at all 5 places of articulation.

The other two kinds of non-pulmonic sounds on the IPA chart both use an airstream mechanism known as “glottalic”, which involves movement of the larynx. Although your larynx probably feels like a stiff and awkward thing, you can, with only a little practice, learn to move it up and down. This is necessary to produce implosives, which use a “glottalic ingressive” airstream mechanism. These sounds are produced by closing off the vocal tract somewhere above the larynx (just like for a normal plosive), and then pulling your larynx downward. The downward movement causes the air trapped in your vocal tract to move through the glottis, producing sound. To get a feel for how this works, you can try making a drinking/swallowing sound effect, *glug glug*.

There is a common misunderstanding that implosives involve sucking air inwards. This is incorrect. An implosive is still a plosive. Air comes up and out of the lungs like normal, and is stopped somewhere like normal. For a pulmonic egressive plosive, like [b], this air is released after a short pause. For a glottalic ingressive, like [ɓ], the larynx moves down first, then the air is released. Pulling the larynx down causes air in the vocal tract to become rarefied, and when closure is released, some air may come rushing back into the mouth, but this is a side-effect of the way that implosives work, and not the main airstream mechanism.

All of the implosive symbols are based on the symbols used for voiced stops. To indicate the implosive part, a little hook is added somewhere. The [ʛ] symbol that I use on this blog and on Twitter is for the uvular implosive. Voiceless implosives, where the glottis closes before the downward movement, are apparently possible, but exceedingly rare, and they do not have a dedicated IPA symbol. Instead, the voicelessness can be indicated by using the “ring” diacritic. Implosives have a fairly restricted distribution, geographically speaking. They are found primarily in central Africa and in south-east Asia, and in a handful of languages in central and south America. They are completely absent in Europe, north Africa, the middle east, and the rest of Asia.

The final column in the non-pulmonic consonant chart is labelled “ejective”. The airstream mechanism for these sounds is called “glottic egressive” and they are, in a sense, the opposite of implosives. For an ejective, air is pushed out of the lungs, and then stopped somewhere in the oral tract. This is exactly the same thing as a “normal” plosive, like /p/ or /t/. What makes ejectives different is that there is a secondary closure at the glottis.

This means that air is now trapped in the oral tract, between the glottis and some other closure “up stream”. Once the closure is complete, the larynx moves upwards, which compresses the trapped air. When the closure is released, the compressed air escapes. This creates a burst which sounds quite different than a plain stop. The release burst is sometimes described as a popping or clicking noise, although these are just casual terms and you shouldn’t confuse ejectives with clicks.

Ejectives are symbolized in the IPA by adding an apostrophe to an existing symbol. You may notice that all of the ejectives use symbols for voiceless stops: you can see /p’/ and /k’/ for example, but not /b’/ or /g’/. In fact, a voiced ejective are impossible. In order for voicing to happen, your vocal folds must be able to vibrate, but to make an ejective you have to close your glottis, which prevents any vocal fold vibration.

In addition to the plosives, there are also fricatives that can be made with a glottalic egressive airstream. These sounds are not produced exactly as ejective stops are, since there is an inherent contradiction: the fricative part of the sound requires constant airflow but the ejective part requires stopping the air and compressing it. Articulating a fricative involves narrowing the space that air can escape through, and ejective fricatives involve an even narrower constriction. This increased narrowing is enough that the air can still be compressed when the larynx raises, causing an extra forceful rush of air when the constriction is released.

Some languages have so-called “glottalic sonorants”, which are also written with an apostrophe, such as [m’] or [l’]. The actual phonetics of these sounds varies from language to language, but they are more like sonorants made with an accompanying glottal stop. Depending on the language, the stop may be just before or just after the other sound, but there is no compression of air that occurs.

Finally, it’s worth mentioning that the velaric and glottalic airstreams are not the only possible airstream mechanisms. Others exist too, they are just absent from human languages. For instance, the Donald Duck voice could be called “buccal egressive” because it involves holding a pocket of air in your cheek while talking.

There is also the possibility of using a “pulmonic ingressive” airstream, which is speech produced while sucking air inwards. This actually does occur but it is only used under highly restricted circumstances, such as discourse particles like “yeah” and “no”, or expressions of pain. Ingressive sounds are well-known in Swedish , but have been found to occur in languages all around the world.

Tell the world what you think! Cancel reply